It’s December! I don’t know how that happened. This year has been a total whirlwind!

Anyway, the start of December means that I can start posting Christmas recipes, YAY! In case you didn’t know, Christmas is my favourite baking season and generally one of my favourite times of the year.

I can’t help getting caught up in the festivities.

The only part I don’t look forward to is the stressful Christmas present shopping because I’m a terrible procrastinator and always end up leaving it until the very last moment. Over the last few months I’ve been making a lot of Eton Mess. It’s one of my favourite desserts because it is so simple to make, absolutely delicious and not too heavy. I love strawberry desserts. I’ve made it numerous times over the last few months, either in individual cups or in one giant bowl served up to a group of people.

It’s the ideal dinner party dessert because it’s so quick and easy to make and as the name implies, you don’t have to concern yourself with the presentation because it’s just meant to be a big mess of cream, meringue and strawberries. 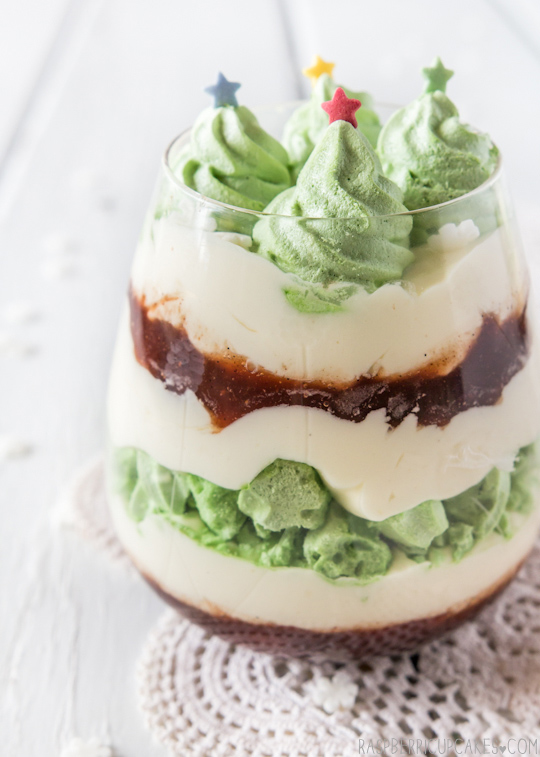 But this time around, I decided to fancy it up a little bit so that I could take pictures that didn’t look like a big ugly blob in a bowl. I remembered Jacq’s pretty Christmas Tree-shaped meringues from the blogger picnic a few years ago, and I thought they would be a great twist on the plain meringue cookies that you usual crumble into the Eton mess mixture.

Plus I added some of the usual Christmas spices to the strawberry sauce, and there you have it;Christmas Mess. 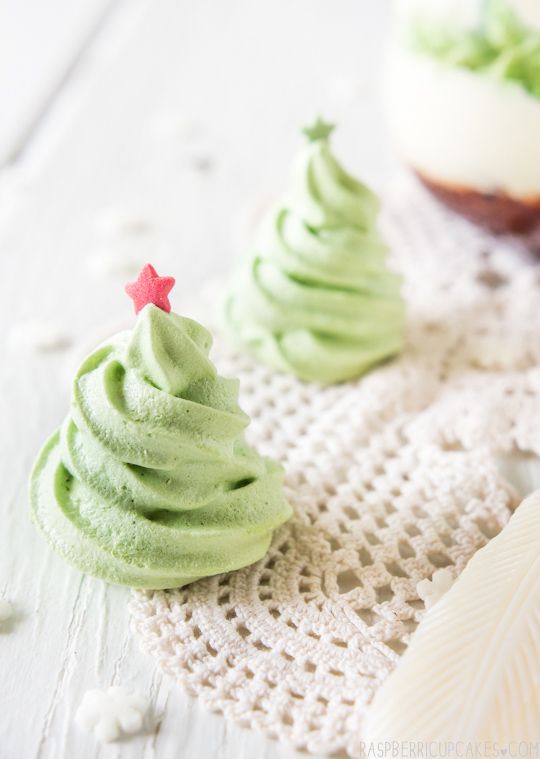 The Christmas Tree meringues definitely make this special. They’re actually quite easy to make (if you’re patient) and even if you don’t want to make the whole dessert, just making these meringues is a great holiday treat. I actually used pandan paste to colour and flavour these little meringues, it worked perfectly! Of course you could just use green food colouring, and you could even add a little vanilla or peppermint flavouring if you like.

I bet a peppermint meringue version with chocolate sauce would be great too! Even when you put the effort into layering all the ingredients neatly, once you start digging your spoon into it, you’ll still end up with one big mess in your bowl. It’s a little bit sad to smash up those pretty trees with your spoon but you won’t regret it once you start eating it. I’ve included two versions of the strawberry sauce, one using fresh and one using frozen berries because I know they won’t be in season for a lot of people.

For the record I used frozen berries for the dessert in the photos, but usually I prefer to use fresh berries if I can get them, because this type of dessert really celebrates the freshness of the berries. 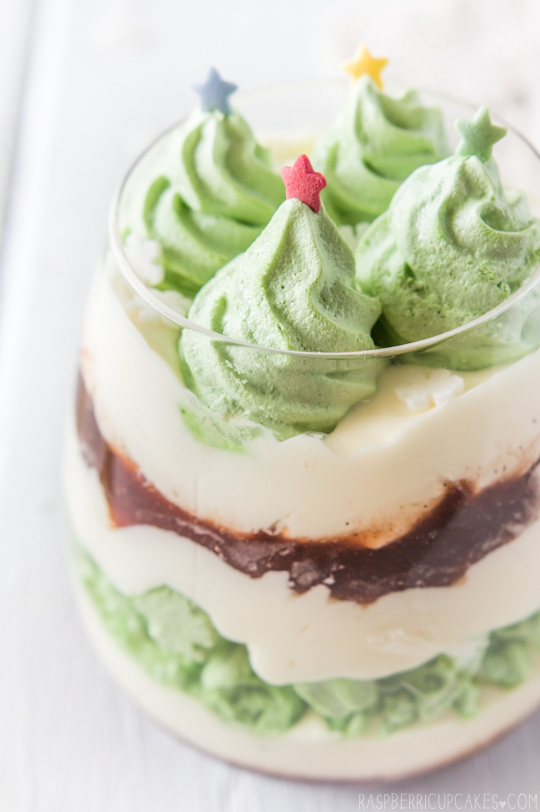 Christmas Mess with Christmas Tree Meringues
(meringue recipe adapted from Penguin Says Feed Me, serves about 4-6 people)
For the Christmas Tree Meringues:
2 egg whites, at room temperature
125g (about 2/3 cup) caster/fine granulated sugar
Green food colouring (preferably gel colouring) or pandan paste
Optional: star-shaped sprinkles to decorate
Preheat the oven to 120ºC (250ºF) (if fan-forced, 100ºC (215ºF). Line two baking trays with baking paper. Place egg whites in a large mixing bowl and beat on high with an electric mixer until soft peaks form. Gradually add sugar, once the sugar has been incorporated, add the green food colouring until the desired colour is achieved (I used about 1/2 tsp). Continue to beat until until glossy, firm, very stiff peaks form (pinch a small amount of mixture between your fingertips to ensure that the sugar has completely dissolved into the mixture). Place mixture in a piping bag with a 1cm wide star tip. Pipe the meringue onto prepared trays in a tall-narrow spiral motion to create a tree shape. The base of the spiral should be about 2cm in diameter. Leave enough room between each tree to allow for the meringue to spread slightly. Top each tree with a star decoration.

Bake in the oven for about 45-60 minutes (actual baking time will depend on the size of your meringues), or until dry, cooked through and easily lifts off the baking paper.

If your meringues start to brown in any way then your oven is too hot, reduce the temp and increase the baking time. When ready, turn off the oven and open the oven door slightly ajar and allow the meringues to cool completely in the oven. Once cool, store in an airtight container until ready to serve. 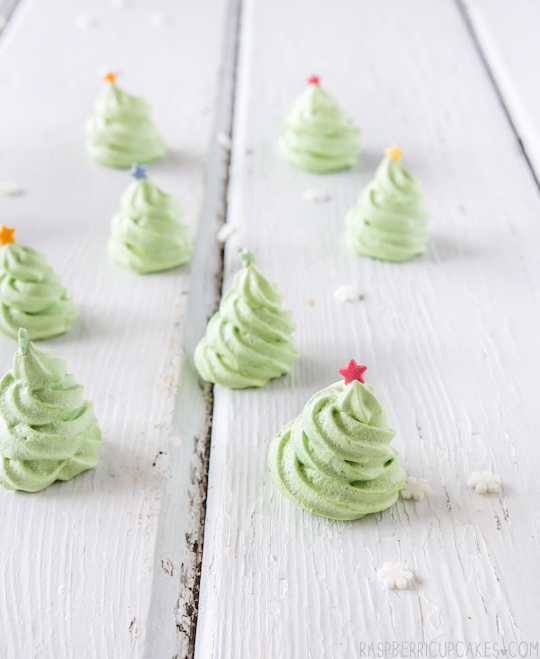 For the Christmas Mess:
250g (1 punnet/9oz) strawberries (fresh or frozen)
2 tbsp golden syrup (can substitute with molasses)
1/2 tsp ground cinnamon
1 tsp ground ginger
1 vanilla bean pod, split and seeds scraped
600ml thickened cream, cold
2 tbsp icing (powdered) sugar, sifted
Pinch of freshly grated nutmeg
If using fresh strawberries, hull and halve strawberries, then place in a bowl with golden syrup, cinnamon, ginger, and vanilla bean seeds and pod and allow to marinate in the fridge for at least an hour. If using frozen, place whole strawberries, golden syrup, cinnamon, ginger, and vanilla bean seeds and pod in a small saucepan and stir, simmering over medium heat until thickened. Remove vanilla bean pod from mixture and chill mixture until ready to serve. When ready to serve, whip cream with icing sugar and nutmeg until soft peaks form. Assemble right before serving or meringue will go soggy. Using 1/2 cup capacity serving glasses (the cups in the photos are actually 1 cup capacity and too large for a single person serve, so use about half the amounts pictured), layer strawberry sauce, cream and meringue.

I crumbled one layer of meringue in the middle and then topped with whole Christmas tree meringues on top.

(Alternatively you can layer all the ingredients in a large trifle bowl and spoon serves into smaller bowls.) 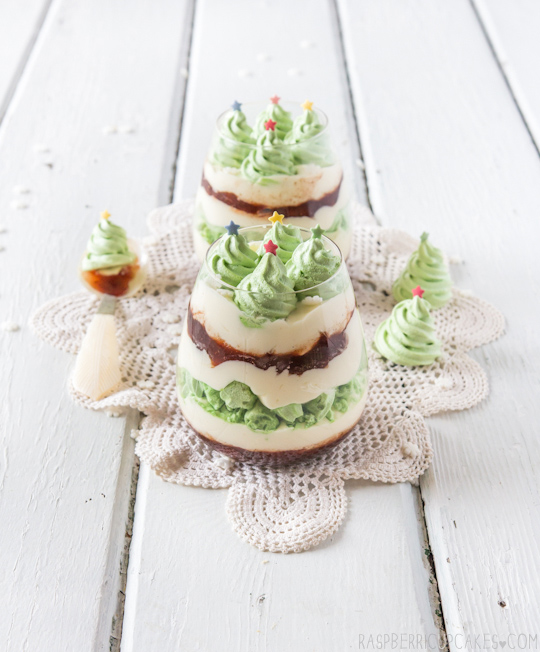